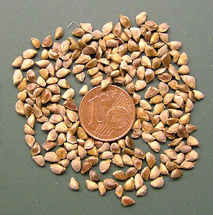 Already in the 15th Century the first shipping activities of forest seeds were documented for Europe. Active trading became popular at the beginning of the 19th Century with the proliferation of artificial regeneration. Improved roads contributed significantly to the increasing amount of seeds being transported across Europe. Active trade of forest seeds and seedlings is ongoing in recent times.

The long-term objective of the BFW project FORGER was to better understand the dissemination of forest seeds across Europe and possible threats to forest ecosystems due to the influence of new reproductive material.

There is hardly any knowledge available on the trade of seeds and seedlings, both historically and in recent times. In this EU-funded project an attempt was made to investigate the historical transfer based on different sources. While today genetic investigation is in the focus of historical analyses, there are few other sources available – records documenting which provenances were introduced and cultivated are rare. A pan-European view was missing. Important country-specific information was often only published in the respective country’s language. Therefore colleagues from different countries within the EU joined the project, to make an overall European review possible.

BFW as coordinator of this study was addressing Central Europe. Results have shown that there were only few trade centers in this region. Harvesting areas were very small compared to the large-scale reforestation zones. To compare up-to-date data the Forest authorities of the Member States were contacted directly, as reproductive material is not considered in the forest products trade statistics of Europe. The quantity and quality of information available differs widely, due to the lack of harmonized recording systems for data on import and export of seeds and seedlings within Europe.

The project made it possible to harmonize the mentioned data to a large extent. The completed data pool provides an overview of the seed and plant flows within Europe over the last 20 years. Ownership structure, prosperity, role of forest management, degree of centralization and many other factors of a country are included in the analyses.

The FORGER project has shown that material from alpine stands was frequently used outside its domestic dispersion area. A large amount of material originally from Sudetes has been planted in Nord-East Germany and North-West of Poland. The polish larch (Larix decidua var. polonica) was mostly planted within Poland. Seeds and plants from Carpathian Mountains were particularly traded within the region. Researchers found out, that the genetic pools of the Alps and Poland are less influenced by other origins than for examples those of the Carpathians, which are influenced by gen material originally from the alpine region.