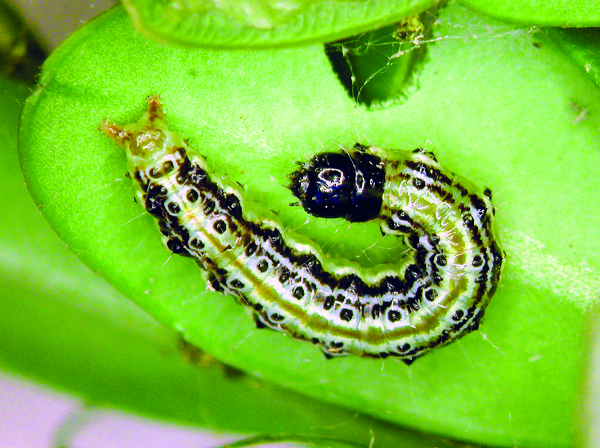 Experts from the European Union and the Black Sea region discuss about measures taken against the aggressive moth.

Soon infected box trees will be located again at cemeteries and in private gardens. The plant pest is easy to identify by the typical feeding pattern. The moth species is a well known pest in Austria and also the eastern Black Sea region.

First occurrences were monitored in 2009 in the state of Vorarlberg. Today the box tree moth has spread over whole of Austria – often through trade and transport of infected plant material and on a smaller scale because of the insect’s flying activities. Infected plants were located in Vienna, Lower Austria, Carinthia, Burgenland, and outside the alpine regions in Upper Austria and Styria. Serious damages were also found in the region of “Inneres Salzkammergut”, where the box tree plays an important role in landscape architecture.

Within the state of Salzburg plants in the city of Salzburg as well as the foothills of the Alps have been colonized by the insect. Infected regions are also found in Tyrol (“Außerfern”) and Vorarlberg (“Rheinebene”).

“Warm winters have played a fostering role in the adaptation of the insect in Austria. This year’s cold winter might have a positive effect on the wider spreading of the box moth”, explains Berhard Perny, an expert for forest health from the Austrian Research Centre for Forests (BFW). No natural enemies have diminished the occurrence of the moth species so far. Interference by people (collecting insects or treatments with insecticides) is the only measure to be taken to prevent infected shrubs from being destroyed.

The moth species (Cydalima perspectalis) originally comes from East-Asia. The caterpillars of the small butterfly lead there to severe damages of Chinese box trees. This has become an increasing problem in the Eastern Black Sea region within the last years, as natural enemies are also missing there. The Eastern Black Sea coast is a rural area with agriculture as main source of income. The domestic box trees (Buxus colchica) are reaching much higher volumes than the Austrian box tree shrubs and are mainly harvested as fuel wood.

Experts from the European Union and the Black Sea region met in the beginning of April 2017 at BFW to discuss possible strategies and actions to be taken against the spreading of the moth. “The BFW offers a platform for international knowledge exchange”, emphasis Peter Mayer, Director of BFW.

The project is financed by the Federal Ministry for Europe, Integration and Foreign Affairs, the United Nations Development Programme (UNDP) and the EU. The Austrian Chairmanship of the Organization for Security and Co-operation in Europe (OSCE) enganges in the meeting with special interest, as it is a good example to build trust across dividing lines.